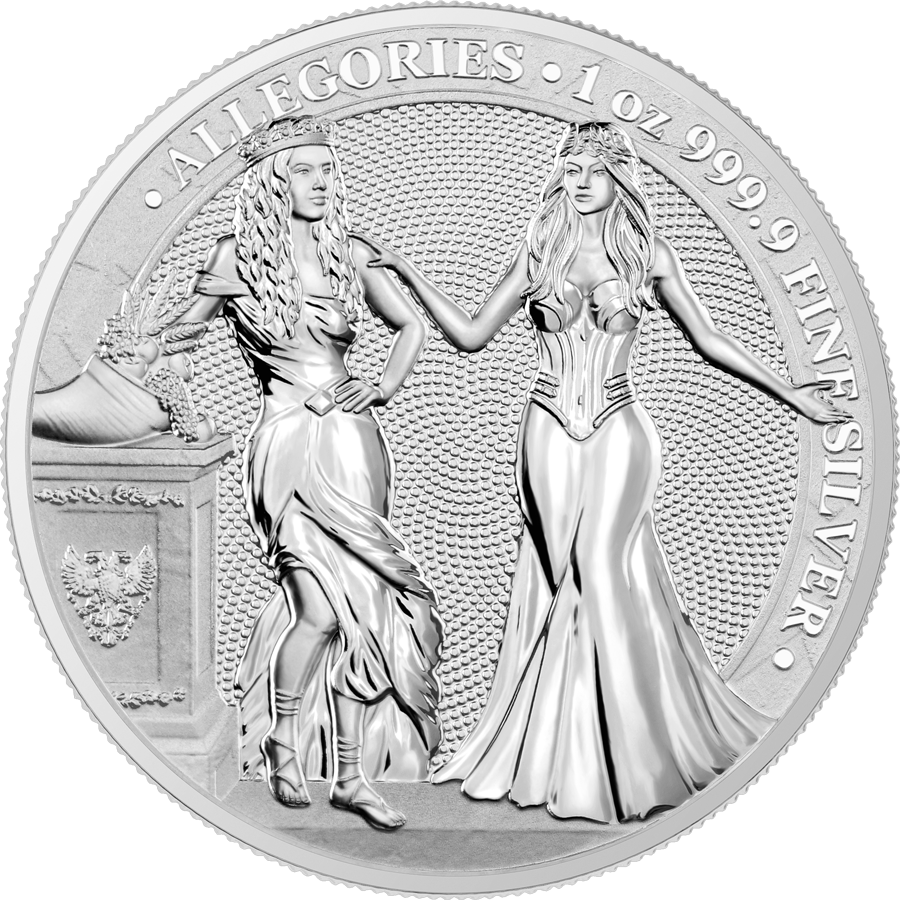 Germania Mint presents the third edition of the Allegories series – Italia & Germania. The whole series presents the personification of countries in a form of beautiful, sensual and strong women. The Allegorie series coins are created in one diameter of 38.61mm and four different weights & heights, in the range from 3 mm for 1 oz to 25.85 mm for 10 oz coin.

The personification of Italy is depicted as a young woman with long, curly hair and pleated dress highlighting her femininity. A crown with mural-like towers resting on her head, represents an emblem of tutelary deities who watch over a city. The Horn of Plenty by her side symbolizes prosperity and wealth. Like in previous Allegories designs, Lady Italia is accompanied by our, well known, personification of Germania. Women are standing close to each other with Germania’s hand on Italia’s shoulder – a symbol of friendship between cultures.

Reverse
According to the previous series, the image on the reverse is the coat of arms representing moral principles and noble values. Germania was a historical land and has never been an official country, that is why we have decided to create our own interpretation of its coat of arms. Its symbols and design are a creation of our imagination, however it has been created in accordance with applicable heraldry rules.

Germania Mint’s visualisation of Bicephalous eagle is a Roman mythology symbol associated with Janus, god of all origins, guardian of doors, gates, passages and bridges, the patron of contracts and alliances. Heads facing the opposite sides symbolize the past and the future.

The gold ribbon with three flowers represent the determining values of a strong and independent nation – unity, integrity and freedom.

The wild boar – a symbol of mightiness, was a very popular and respectful animal in the Roman Empire. Legio I Italica, Legio X Fretensis and Legio XX Valeria Victrix are three of the most famous Roman legions with a boar in their emblem.

The Coat of Arms is surrounded by a wreath of oak leaves. Wreath symbolizes loyalty, stability and national unity. In mythology and ancient times, only people who wielded enormous power – spirit, muscle or magic, were allowed to wear it.

All values presented in the symbolism above, were respected by Germania and Italia.

Package
Italia & Germania 1 oz Ag 9999 BU coin is placed in the dedicated capsule, which secures it and allows to admire the coin without the necessity of taking it out of the capsule.

All our coins are certified. The COA included in each set provides all the necessary information and guarantees the coins value.